Site Proves Advertisers Are Out of Ideas

Here's a site that helps support the notion all creative ideas are just iterations of other ideas. Coloribus Admirror is a collection of ads whose concept/imagery are the same and are presented for comparison's sake. Take look. See if your ad is there.


BannerReport A Database of Banners

If you've ever seen an online campaign and wanted to see it again you are usually out of luck. Tari Akpodiete's BannerReport is here to help. Boasting 15,000 images, BannerReport allows you to view and search for banners based on size, type, style and keyword. Try it.

Most likely in reaction to the fact that everyone in the world has seen an Absolut bottle, the vodka company is extending its brand interpretation by setting the bottle to music. Absolut has launched Absolut Tracks, a website that features various musical producer/DJs musical representation of the bottle. Each producer has created a "song" along with an explanation of the interpretation. If this representation of the brand becomes as embedded as the current visual campaign has, this opens up a whole new world of marketing opportunity for Absolut.

Everything from radio commercials with nothing but the music to ring tones to iTunes downloads to nightclub dance tracks. In any manner that sound can be heard, Absolut can deliver its brand "imagery." Let's hope they move past the current crop of electronika though. 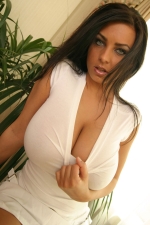 Perhaps desensitized by the plethora of semi-nude hotties gracing the covers of most men's magazines these days, guys are heading elsewhere, hurting many lad magazine's circulation numbers including Maxim UK. Greg Gutfield, the new Maxim UK editor, wants to bring men back and to do so he's offering readers more than just pictures of sexy women. He's offering up their curvaceous glory in the flesh.

In return for offering beautiful women to be photographed and appear in the magazine, they must agree to go on a date with a reader. Good news for the guys. Not so good news for the girls. We all know maybe one percent of male readers of Maxim could be considered hot. The other 99 percent are fat slobs imagining they are hot while drooling over the pictorials. Let's hope, for the women's sake, they get to see pictures of the men. It's only fair. Afterall, does a woman want to date a guy that has as much stomach cleavage as she has breast cleavage? Thanks to Charley Brough for the tip.

Human Locator is a camera-based technology that tracks the motions of humans in ways that can them be used to control advertising signage as they pass by. As described on their website, "The Human Locator analyses a camera feed in real time, sending detailed information about people's location, size, and movements. This data is then used as input to control projections, video, graphic animations, and sound. The Human Locator offers a complex analysis procedure and precise controls for accurate tracking in a variety of conditions. The variables it outputs can be used in an infinite variety of ways." In essence, it's another step towards the advertising world depicted in the Tom Cruise movie Minority Report.