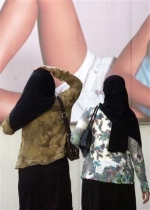 "I don't know. It's hard to tell with American women."

"Yea, with all that flesh showing, anyone could mistake an arm for a leg."

"Wait, is that her crotch or her hip?"

"Hard to tell with the positions these American girls like to put themselves in."

"Why do American women always have their legs spread open?"

"Well not exactly but it's kind of similar."

Amy Corr's Out to Launch column this week features new ad campaigns from Tide who will "spend massive amounts of ad dollars", from Visa reaching for the "New Affluent", from Adidas whose agency 180/TBWA uses some nifty trick photography to bring together past a present medal winners and from Bigfoot Interactive who has launched an email campaign for clients explaining the benefits of adding sender company names to address books so future mailings won't be labeled spam.

On Sunday, October 3 at 10PM, we can get sick pleasure from viewing the excruciating pain ten people go through as they are featured in the Pax reality series Cold Turkey while trying to quit smoking. Of course, they are lured to the show under false pretenses just to make it more interesting. A.J Benza will host. We dare a cigarette company to sponsor their show.

We're ashamed that we missed it when it happened but not so ashamed realizing the New York Times is just covering it now.

In early August a bunch of young women in furry ski gear handed out packages of Tylenol Cool Caplets which have a minty, cooling taste and is being marketed more like gum than aspirin. Tylenol hired Deutsch and Faith Popcorn to help make this happen. The "Tylenol Cool Caps Girls" also distributed the product in Miami Beach wearing far less than fur coats making us wish we hadn't missed that event either. We really need to get out of suburbia more often. If anyone has pictures, please send.

A new eMarketer white paper by Debra Aho Williamson examines how behavioral targeting works, how it relates to search engine marketing and how marketers can make it work to their benefit. Also noted is behavioral targeting's ability to touch the consumer in a targeted manner earlier in the buying cycle than search engine marketing can as it requires no input from the consumer.

Not that we didn't see this coming but another study citing the growth of gaming is giving network execs serious ulcers. A Ziff-Davis study claims 54.5 million U.S. households play console video games (overtaking the 52.3 million PC gamers), 26 percent say their television viewing has decreased and 20 percent say they expect their television viewing to decrease further. Additionally, mobile (cell phone) gaming has increased to 16.3 million households up from 8.1 million a year ago.

While growth continues, Starcom Play VP Director PJ MacGregor, whom we contacted for this story, thinks the focus of gaming marketers is in the wrong area, "The reality is that most of the people that are paying attention to the gaming space are thinking about it in a very limited manner. Just as there is more to internet marketing than "banners" and keywords, there is more to gaming related marketing than "advergaming" and "product placement". Those two terms should be removed from the vernacular."

MacGregor says the much-hyped in-game integration is but a small piece of the pie saying, "Marketing alliances that include co-marketing, co-op advertising, packaging, new products, retail tie-ins, promotions etc. are going to be an increasingly popular route for marketers to take when it comes to leveraging the gaming universe."

MacGregor sees the space moving away from boxed gaming to connected consoles. "More and more gamers are moving towards connected play - this isn't going to slow down. Because this space is "connected" advertisers will be able to get in and out quickly - no 6-12 month leads that we experience with the boxed products. The ad units or ad experience opportunities are limitless - downloadables, additional levels, tournaments, full-motion video ads - like broadband video online, promotions etc."

Like a bunch of kids pushing and shoving each other while debating who just won the afternoon bike race, Turner Chief Research Officer Jack Wakshlag is shoving CBS (who, oddly, declared Summer over a couple weeks ago) and the Syndicated Network Television Association around claiming cable the real winner in Summer ratings. Wakshlag made a presentation yesterday showing prime time ratings for the nets, prior to the Olympics, down 6 percent for adults 18-49. He then went on to state NBC Olympic coverage has pushed PUT levels up rather than steal from cable. After that, it gets far too confusing for us to make sense of or even care so it you want more on this, read the MediaPost article for the full scoop.