Now that The Apprentice was a ratings winner last year, this year it's predictably packed with product placements right down to Trump's silly, "Cancel that meeting, I have to go to Mattel" statement as he rides in his limo. No doubt, the show will be a ratings winner again but like all successful shows, marketers have discovered it and are all over it. It's not a bad thing.

It's just something to get used to. Oh, and Rob was the first to be fired.

Anastasia Goodstein of YPulse points to a new "Naked Truth" ad campaign launched this week for an upcoming A&E Biography on October 1 featuring the now legal wet dream team, Mary-Kate and Ashley Olsen. The "provocative" campaign, shot by Annie Leibovitz, will feature other upcoming featured celebrities on the series such as Brooke Shields, Pamela Anderson, Jon Bon Jovi, Jimmy Fallon and The Rock. 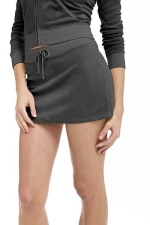 Apparently, school officials don't know their fashion brands and sent a 10th grader to the principal's office for the day for wearing a skirt with the butt slogan, "It's all about Juicy." School officials felt the skirt and its slogan could lead to sexually harassing comments. While true and inevitable, it was the girl's mom who gave the ultimate flip off comment to the school informing them they have no juice and are fashion clueless.

Following its successful launch of I Love Messenger, French agency Heaven is launching MSN Cards in France. Targeting teens, the cards are similar to business cards and, like adding someone to your buddy list, the cards hope to be a physical representation of importance of sharing your screen name. The agency has created the MSN Cards site where kids can go sign up for the cards. An initial launch of 800 decks "sold out" in under two hours.

Ultimately, 40,000 decks of 800,000 cards will be offered as a means of spreading the benefits of MSN Messenger in a viral manner.

Just as I Love Messenger began in France and spread to 23 countries, MSN hopes MSN Cards will see the same spread.

PoynterOnline reports Reuters receiving a roadblock order from Honda for the introduction of its Odyssey on September 22. Reuters believes it to be the first of its kind - a 24 hour take over of all sponsorable positions on the site.

While many advertisers have done homepage takeovers and other "site dominant" buys, a large, full site buy of this kind appears to be a first.