Mary-Kate Olsen Puts On The Pounds With McDonald's France

While the image of previously food-challenged Mary-Kate Olsen pigging out on a Whopper might actually be interpreted as healthy, some have their underwear in a bunch over the Olsen's lending their image to McDonald's in France. The two are featured on the website and tied to various promotions. They also appear on posters through out the country. Maybe the stick figure images of the two will get the French to eat McDonald's food out of pity for Mary-Kate. Of course, the Mary-Kate thing was really all about drugs more than food but that little factoid just sucks the fun right out of this story, doesn't it?


The Viral Awards Set To Launch

The Viral Awards, dedicated to viral and buzz marketing is launching in London this month with a jury chaired by HHCL/Red Cell Creative Director Steve Henry.

Awards Director Alex West said, "We have set up The Viral Awards to put the spotlight squarely on the medium. This is not only a great opportunity for pioneering agencies to showcase their work and the breadth of their vision, but also for others to garner a greater understanding of the opportunities presented by Viral and Buzz. The Viral Awards will not only showcase the very best creative work from around the world but also award work from a results perspective."

Viral and buzz marketing has grown quickly in the past twelve months as marketers explore new means to deliver marketing messages. Maverick Media Managing Director Will Jeffery adds, "Many agencies and clients are already achieving tangible success with the medium but there are a great many more who are still looking to really take advantage of the obvious benefits that viral can provide. We are really excited about the awards and hope that can help create a greater understanding and take-up of the medium by more advertisers."

The Awards will be held at the London College of Fashion on 13th January 2005 and the call for entries is open now. For images or more information check out the website or please contact awards Director Alex West at alex@viralawards.com 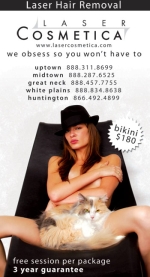 Laser Cosmetica has launched a campaign including an ad which pays homage to the oft used phrase, "shave your kitty" to promote their $180 laser hair removal. The ad, with the tag, "we obsess so you don't have to," offers a three year guarantee. Hmm...never knew laser treatment could last that long but, then again, we've never tried that sort of thing.

The campaign, created by New York's Night Agency, including a series of three ads which are running in New York Magazine, Time Out New York, New York Post, Village Voice and others. Full size ad can be viewed here.


The Devil Shows His Support For Bush

It seems like there are more political spoof commercials than there are real ones and here's another just to prove that point. In this "commercial" the Devil himself shows his support for President Bush by explaining how alike they are and how well the work together. Claiming Bush has made his job easier, Satan says he's been active in politics for a long time, helped make Americans scared and suspicious of everything and done his part in making bombs and tanks more affordable insuring, along with Bush, they get more use. Satan closes by saying,"Give America Hell. Vote for George Bush. The only man with balls big enough, steely enough, cold enough to give him (Kerry) a run for his money."

Oprah's 2004 season premiere yesterday spent the entire show promoting and giving away to every member in the audience, a new Pontiac G6. Seven million dollar's worth of Detroit metal. Oprah even toured the plant and played vingette's of that on the show. While we are as far from Oprah's demo as one could get, it sure seems like the audience was having a good time ...screaming, hugging, jumping and just generally looking like a fool as most do on talk shows. But hey, Pontiac got some good vibe out of this. Thanks to B.L. Ochman for the tip.


Latest 'Got Milk' Commercial Most Hilarious in A Long Time

Here's a quick rundown on our friends who help pay Adrants' bills and who may have a product or service beneficial to your business.

Long-time advertiser, Claria, is still with us offering to the ability to target your prospects based on their 0nline behavior. HP is on hiatus from promoting their Designjet printers but a bird tells us they may be back soon.

SearchFeed, a pay per click network, has been with us about a month and can help you make the most of your search engine marketing offorts. TBS is promoting their syndicated run of the HBO hit Sex And The City. David Reese is promoting his hilarious political cartoons. scenarioDNA research, a research and brand planning sompany, offers ad agencies services which help get inside the mind of the consumer to aid in developing better marketing programs. Affiliate Marketing Marketing by WSO offers website publishers managed affilite programs whereby publishers can promote products and make money doing so. Hugh MacLeod, the guy who draws cartoons on the back of business cards is hyping his wildly snarkish cartoons and his 25 (and counting) steps toward being more creative. NameSecure is promoting free .info domains.

So check them out. They makes this all possible. Maybe they have something for you, maybe they don't. You won't know until you look.