Author Mark Hughes is writing a marketing book and is battling with his publisher over naming the book. He describes the book as "A marketing book about the phenomenon of buzz, brands that get buzz, why, and the six secrets of buzz marketing for brands and celebrities alike" and wants people to vote for a title. You can check out the choices and vote here. 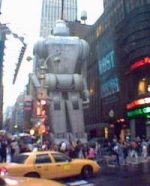 A giant, 40-foot robot has been spotted in Times Square by Jason Kottke and reported by Gothamist. It's a promotion for the upcoming Paramount movie Sky Captain and the World of Tomorrow.

The movie, about disappearing scientists and an evil plot to destroy the world, stars Jude Law, Gwyneth Paltrow and Angelina Jolie and was shot entirely on green screen with all visuals added by computer.

London based television production company Zig Zag Productions is making a television program for a UK terrestrial channel called Best Ads Never Seen and is looking for ads that were made but for some reason never got a chance to air. So here's a chance for all you ad agencies, production companies and directors to have work broadcast which either got killed by the client or were banned because of complaints by a fringe conservative group. Send your submissions to daniela@zigzag.uk.com.

It is well known that consumers have had it with the incessant delivery of irrelevant ad message. Two new technologies hope to put the consumer in control and offer greater relevance. Really Simple Shopping is based on RSS technology and provides the opportunity to sign up for and receive specific messages from specific marketers to a desktop newsreader program. It's similar to email but, to date, is spam free.

Dotomi lets consumers opt-in to receive specific banner advertising on partner sites. In exchange for providing personal information, the consumer, when visiting a participating website, is delivered a banner based on their personal information rather than the standard banner otherwise delivered.

While both companies are heading in the direction of eliminating ad clutter and providing more value for the consumer, it'll be a while before everyone gets over the "big brother" connotations that go along with this sort of "all knowing" advertising.