Association of National Advertisers President Bob Liodice has politely ripped Ad Age a new one over an editorial the magazine wrote commenting on the Family Friendly Programming Forum's withdrawing its endorsement of NBC's Father of the Pride claiming the group handled it badly. Apparently the show, initially endorsed by Family Friendly, a group of national advertisers who champion family-friendly programming, had taken a turn towards the seedier side and Ad Age got their undergarments in a bunch over Family Friendly's policies. Read the ANA's take here. 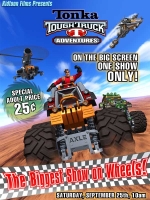 Using Regal CineMedias Digital Content Network, the Saturday morning screening of Tonka Tough Truck Adventures - a new family movie created for kids ages 3-9 - is the first of a planned series of regular Regal events geared towards kids and families. In addition, attendees will also be able to play with dozens of Hasbros Tonka trucks in theatre lobbies, receive fun giveaways, and more. The event is being promoted via trailers, counter cards, banners and other collateral.

To date, Regals DCN has been used to bring both live and first-run events to audiences in theatres across the country, including educational events such as Holes: Reel Thinking, James Camerons Ghosts of the Abyss and In The Directors Chair with M Night Shyamalan as well as concerts featuring some of musics leading artists.