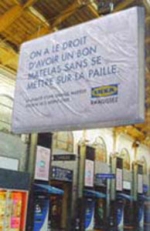 Agenda reports a new campaign from IKEA which consists of 39 mattresses wrapped to look like billboards and hung in major Paris railway stations. We wonder how long it will be before Parisians tire of the campaign, rip the mattresses from the ceiling and hop on for a nap. Or how about all those teens who are looking for a place away from their parents to get a little closer to their girl/boyfriend? Looks like IKEA has some nifty experiencial marketing going on. 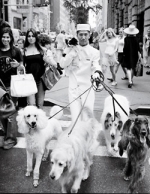 Hot off her work for for A&E Biography's Naked Truth ad campaign with the Olsens, Annie Leibovitz stepped into the world of Peninsula Hotels to shoot images for the hotel's recent ad campaign called, "Portraits of Peninsula."

The press release gushed in typical fashion, "So much of what makes Peninsulas style of hospitality special is the personal connection our staff has with guests," said Peter C. Borer, Chief Operating Officer, The Peninsula Hotels. "Our culture of warm and genuine service is expressed through every one of our family of employees. To us, service is an art, which is why we chose a true artist to represent it. Annie Leibovitz captured the spirit of our employees with sincerity. Through the honesty of her images, we have created a campaign that will resonate with our audience for a very long time."

London Ad Agency ASABAILEY has rolled out AIR (Advertising In Retail), a network (demo) providing advertisers the ability to place television ads or long-form videos alongside the advertiser's product listed on a participating online merchant's website. The AIR network provides marketers the ability to influence sales at the moment of purchase. The premise that influencing consumers at the moment of purchase is, of course, not new.

However, the proliferation of digital media and online buying may make models such as AIR network viable options for marketers interested in getting closer to consumers at the moment of purchase as well as maximizing production dollars spent creating ads.

Capitalizing on the success of its My Big Fat Obnoxious Fiance, FOX is making the obnoxious thing a trend with its new My Big Fat Obnoxious Boss. The reality series will spoof both Fiance as well as NBC's The Apprentice complete with Donald, Caroline and George look-a-likes telling 12 contestants to "get the hell out of my office" after failing such tasks as begging for money on the street. Oddly, we think this series will be a success. We don't know why, we just do. The series airs November 9 at 9 PM.

We know jessica Simpson is already as delicious as they come but she's now made herself, much to the delight of hubby Nick Lachey, even more delectable announcing the an addition to her Dessert line of body care products. At Rockerfeller Center Sephora earlier this week, Simpson debuted Taste, an edible body cream designed to taste like the foods Simpson experienced in childhood.

"It's low-calorie," Simpson said. "It's like having dessert without the calories, so if you're on a diet, it's a good thing to just kind of lick off every now and then. Or have someone else do it - that's even better" We wonder if the streets of New York will now be filled with wafting, mouth-watering food scents driving people to helplessly lick strangers as they pass each other by. Perhaps Simpson should donate her product to the homeless. They need it more than those of who have homes and spend our money on stuff like this.