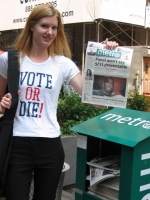 Metro hand promoters were located throughout New York, Philadelphia and Boston and outfitted in Vote or Die t-shirts. The Vote or Die t-shirts were designed and supplied by Sean John clothing. The shirts have become popular by celebrities such as P. Diddy, G Units 50-cent and influential public figures who want American youth to get out and vote.

One of the most unbearable moments of truth in business comes when standing in front of a copy machine assuming, while acknowledging the hopelessness of that assumption, the machine will dutifully perform its job. In this commercial, when presented with the dreadful "paper jam" indicator, a woman reacts in the usual fashion by taking her anger out on the machine. But, as we find out, it's not always the copy machines fault and this copy machine wants her to know that.

Bob Bly, who's been a copywriter forever, doesn't like weblogs.

Expressing that opinion would be welcomed if Bly had a proper understanding of the platform. After reading his article about the topic on DMNews, it is clear he has no idea what he is talking about.

Bly writes, "The first is that most blogs I encounter are rambling, streams-of-consciousness musings about a topic of interest to the author, largely bereft of the practical, pithy tips that e-zines, Web sites and white papers offer." Apparently, Bly has only reader the Xangas and LiveJournals of teenage girls. There are many fine, business focused weblogs with valuable and intelligent content for business professionals published today. For a taste, visit Rick Bruner' s Business Blog Consulting which is a compendium of business weblogs.

Bly then writes, "The second problem involves distribution. With an e-zine, once the reader subscribes, he gets it delivered to him electronically every week or month or however often you send it. But with a blog, the reader has to go out and proactively look for it. And since your contributions to your blog may be irregular and unscheduled, he has no way of knowing when something new of interest has been added." Mr. Bly has obviously never heard of RSS or newsreaders which deliver the content of a weblog, post by post, to a person's desktop in real time without all the baggage in most HTML e-zines. Not to mention the need to sift through spam just to get to the email. By the way, didn't the term "e-zine" go out with the 90's? Bly digs himself in even deeper, "And thats another of my complaints with blogs in particular and the Web in general: the ease with which people can post and disseminate content. "The best thing about the Web is that anyone can publish on it; the worst thing about the Web is that anyone can publish on it," a computer magazine columnist once observed." Mr. Bly one of the most powerful things the weblog publishing platform does is enable many voices to be heard. It's called Citizen's Media. Why should voice a opinion be limited in any way? We can certainly understand why that might threaten your multi-million dollar annual fees earned by writing all those overpriced newsletters for major corporations.

Further illustrating his misunderstanding, Bly writes, "Blogs are, by virtue of being a form of online diary, like diaries: rambling, incoherent and more suited for private thoughts than public consumption. If you have something of value to share, many better formats exist for doing it online than by blogging, including white papers, e-zines and Web sites." Blogs are only rambling incoherent diaries if they are written that way. The weblog publishing platform does not perpetuate a particular writing style. It just makes it easier to publish thought - good or bad. And white papers? Who reads those anymore? All you get out of white papers is high level marketing blather and who needs that? Oh wait, you do Bob. Writing them pays your salary.

Rather than suing the band for co-opting its name, the U.S. Postal Service has entered a marketing agreement with Postal Service, the band. "We could've abandoned the name," the band's record label Sub Pop Owner Jonathon Poneman said, "but it would've been a significant setback. Name recognition is very important to us. While they've certainly settled on a popular name, one wonders what sort of hostage situation they've found themselves in. The band will play an exclusive concert for senior Postal Service execs and the band's music may end up in USPS ad campaigns. 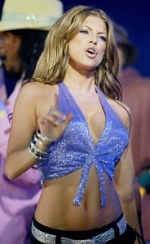 Hummer hosted a branded concert with the Black Eyed Peas in Anaheim, CA for 1,500 Hummer owners to promote its new, smaller H3 which sat on the stage as the band performed. The concert was held one day prior to the official unveiling of the vehicle at the California International Auto Show. Following the concert, a three minute video was shown and then placed on Hummer .com.

Over the next four days, the video had 20,000 views, the heaviest traffic the site has ever seen.

If that brand onslaught wasn't enough for concert-goers, XM Satellite Radio was there pimping its relationship with GM along with Cigar Aficionado which held a cigar tasting event. While brands have had a presence at concerts for a long time, full on brand sponsorships are relatively new. Following the traditional model of offering "content" for free, the growth of concertisements will depend heavily of musical artists's comfort with "selling out."