Akademiks Clothing Gets Slapped For Giving Head on Bus

Hip-hip clothier Akademiks has raised the ire of New York's MTA for slipping sexually suggestive language into a transit campaign. In one ad, a hottie showing bootie is reading a book alongside the headline "Read Books, Get Brain" implying to the unsuspecting that reading makes you smart. Well, little do most know "get brain" means get head - the sexual kind. Needless to say, the MTA is angered by being hoodwinked with hip terminology and has vowed to take down the poster the New York Daily News reports.

The headline was no oversight. It was intentional as explained by Akademiks Ad Designer Anthony Harrison who said, "We knew this. It's coded language, city slang. Teens know what it means but the general public doesn't." It's now likely the term "get brain" will be retired for yet another inventive method of describing that particular means of relieving sexual tension.

The campaign also appears around the country in Miami, Los Angeles, Detroit, Chicago, San Francisco and Philadelphia. At least until they read the Daily News article. 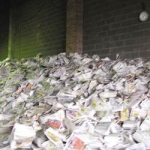 The Long Island Press surprised a Newsday employee as he was tossing undelivered Newsday ad circulars and papers dated for the following Sunday into a dumpster. As LIP photographers snapped away, the Newsday employee pleaded with the reporter, "C'mon guys, don't do this to me, please. I got kids. I got a mortgage to pay. I need to do this. This is my only source of income."

In the midst of circulation scandals, Newsday appears to be continuing its practice of overprinting and dumping to maintain circulation base.

The Long Island Press also states Newsday appears to be creating phantom credit card numbers and putting non-subscribers with delinquent accounts back on the circulation.

We think there' a new rash of nasty calls from advertisers inundating the Newsday phone lines right about now.

In a knock off of assvertising, changes in football (soccer for those in the U.S.) regulations now allow coprporate logos on the backside of player's shorts.

Following the car giveaway on Oprah, Pontiac is extending its reach into the realm of product placement with embedded appearances in the WE Women's Entertainment Cinematherapy show, a movie showing with bookended commentary. The car will appear at the beginning and end of the show when the hosts introduce and then review the movie. During those periods, the car will be driven while the hosts discuss the movie as well as show off the car's features.