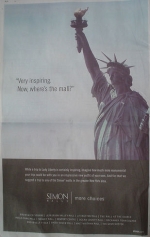 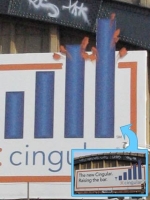 In the "it's just a fuckin' ad" category, Adland points to a Low Culture article which, while likely a spoof, calls attention to a Cingular outdoor campaign that shows cell phone bars breaking through the top of the billboards border. Apparently, Low Culture has never seen cell phone bars or realized the twin towers were the same height and thinks this ad is a sick twin towers/9.11 joke by Cingular. Calling the billboard "tasteless" and insensitive," Low Culture claims the city is still reeling from the 9/11 attacks. Not to belittle the event in any way (I knew someone on one of the planes) but New Yorkers are resilient. They move on. We've all moved on. This is just an ad and a good one for that matter.

ESPN, in a deal with Sprint, will launch its own branded mobile phone service which will stream sports video and audio along with graphics and news.

The move puts some real world application to the screen marketing trend whereby methods of delivery other than television, computer and video games are being explored. The mobile phone is destined to supplant, in part, many other mobile devices such as handheld PDA's, gaming devices and even the popular iPod. It's just a matter of time before technology makes it possible for all of these devices becoming one. In terms of demand for this potential device, it's there. Why carry more than one device if you don't have to? Already Motorola's RAZR phone has merged many of the features now handled by separate devices as has HandSpring's Treo. 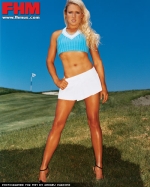 The LPGA now has its own Anna Kournikova. Natalie Gulbis has sexed up her image in a recent FHM spread and those in the golfing world don't seem too concerned. Even though the USGA didn't like a calendar she did, LPGA Commissioner Ty Votaw said, "As our players become recognizable celebrities, more unconventional media outlets are becoming interested. If Natalie is comfortable, we're supportive of the decision." Her father, while blessing the appearance in FHM, was a bit more reserved. "This is an athlete, an LPGA professional. We're not looking for a 'skin' type of thing," he says. "No way she's wearing underwear or a negligee." Not that she has to. The spread reveals quite a bit of her luscious body. In the accompanying FHM interview, guys will be happy to know she says the size of the wood always matters.

While she's already had marketing deals with Titleist, MET-Rx, GeniSoy and EA Sports, she's not yet become as well know an as Kournikova. No doubt, marketers will be knocking on her door soon. Gulbis joins other sports hotties including Maria Sharapova, Daniela Hantuchova and Jelena Dokic. See them all here.