The iconic Aflac duck, which scored highly in a recent consumer awareness study and boosted brand recognition from 12 percent to 90 percent since 2000, has be relegated to background status in a new ad campaign from the insurer. In the new ads, part of a $50 million ad campaign, the duck will not utter its signature "Aflac" quack and will appear only in the background. Conversely, the duck will now become part of the company's logo.

The duck his risen to M & M character/Mr. Peanut/Tony the Tiger status. While recent research conducted by Aflac points to a need to further explain what Aflac does, messing with well known icons is always a risky bet. The new ads will now follow the out of place, "Gee, I just got hurt and can't work so Aflac is going to help pay my bills" conversation between two people that never occurs in real life. 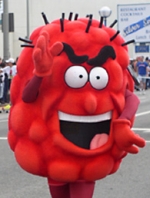 All things lead back to Janet Jackson's nipple these days. For fear of FCC retribution, LA broadcasters have refused to air a Los Angeles County health agency-funded AIDS Healthcare Foundation ad that features two gay men the morning after and an oozing cartoon character representing syphilis. The Foundation has filed a complaint with the FCC and is seeking clarification from the TV station as to why the ad was refused.

For its part, KCBS Spokesman Mike Nelson said, "We consider the prevention of sexually transmitted diseases a serious matter," KCBS spokesman Mike Nelson said in a statement. "It is an issue that we have addressed and will continue to recognize through fair, accurate and balanced news reporting and the broadcast of public service announcements. With that said, we do not believe the spot we received was appropriate for our broadcast TV audience."

The ad was set to air on NBC's Will and Grace and during late night programming. The groups were able to get several cable stations, whose content is not regulated by the FCC, to air the spot.

While the launch of a weblog is always welcomed, MediaPost calls into question the motivation behind recently launched NewsBluntly. The articles themselves, which comment on the inner world of television reporting, are fine. It's the blog's association with TheNewsMarket.com that has caused concern. TheNewsMarket.com is a site containing a vast collection of b-roll video marketers provide and hope television journalists will use for their on-air reports. The latest additions are promoted on the blog. While TheNewsMarket.com has a disclaimer clearly stating the footage come from corporations, the blog does not. Is it a big deal or just another new blog marketing tactic?


Adrants Wants Your Opinion on Advergaming

There's a discussion brewing in an Adrants Network Forum on Advergaming. Members are sharing their thoughts on effective and appropriate use of advertisng in games and who's doing it properly now.

If you work in game design, place ads in games or are just interested in the topic, join the discussion here. If you are not a member, use this pre-approved invite link here to sign up.