A recent billboard campaign placed by Champaign, Illinois hip hop record label Up A Notch Records apparently encouraged local student organization UC Hip Hop to "vandalize" this billboards to achieve more publicity. The boards, with the headline, "Hip Hop Rots Your Brain," were accompanied by a logo for the fictitious Coalition of Responsible and Attentive Parents whose acronym, not surprisingly is CRAP.

One of the boards was vandalized to read, "Stereotypes, Racism, Ignorance Rots Your Brain." The campaign and the vandalizing are hot topics of discussion on a UC Hip Hop and LiveJournal forum. The cynic in us, along with the all too convenient images and forum commentary, makes us think the whole thing is manufactured but, then again, we are very cynical. 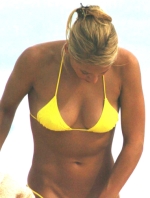 There's always a premium on well placed, well viewed media and, today, Anna Kournikova's bikini is no exception. Trouble is, planning a media buy to coincide with these well viewed bikini appearances would not be an easy task. Though, with paparazzi recording her every move, an enterprising media planner could cut a deal with Kournikova's handlers or, better yet, directly with the photographer who could, with the help of a graphic designer, easily photoshop a brand's logo onto her swimwear. Then when Kournikova's images race around the Internet faster than a teenage boy's first time with a....oops, yes, we know that one is so over...the brand would reap more exposure than all the Super Bowls combined. And talk about time spent viewing.

Today, though, might not be a good day for an advertiser to avail themselves of Kournikova's worldwide reach as it seems she's either suffering some sort of bikini bottom malfunction or has acquired a sudden fascination with her most private of parts. It might be best to view these images when your boss isn't looking.