Following its launch in Philadelphia, Comcast has expanded its Ads-On Demand service to Baltimore. The service provides subscribers the same features of its content On-Demand service but provides consumers the ability to select commercial to view just as they might select a movie.

The trend towards consumer control over media consumption and the increasing ability to skip ads, forces this model. Of course, the time will come when a person can insulate themselves completely from all advertising messages. But, at the same time, people will still need stuff. One place to get info on stuff is ads. In a sense, this service is a benefit to people as they will now be able to seek out and view new product information and offers just as they do now on the web.

With this move to everything-on-demand, one hopes, marketers won't stop with :30's. In fact, everything should be on demand. Entire websites and ecommerce capabilities should be readily available through the TV remote control. Besides, shopping from the couch is a lot more comfortable then when hunched over a keyboard.

Most, if not all viral advertising is created to be just that - an ad that, hopefully, is engaging enough to be passed around like wildfire. Viral marketer Asa Bailey wants to try something a little different. He wants to create viral content for content's sake with sponsorship as an afterthought. Of course, sponsoring content is nothing new. It's been done in all media since advertising was invented. And certainly there has been viral content online that has been loosely tied to sponsorship before.This is a bit different.

Bailey wants to see if there is a new online viral advertising model.

One, in which sponsorship is secondary. To test his theory, he has placed an ad on eBay (where else?) soliciting sponsorship of a viral video he plans to create. The video, called Knocking Down Victoria Beckham, will feature a Victoria Beckham look-a-like prancing about a store, incognito, shoplifting items from the baby section, escaping, seeing hubby David across the street then running to him only to be smacked down by a bus. We do love whacking our celebrities, don't we? The sponsorship of the viral includes opening and closing logos as well as the pervasive presence of a URL along the bottom of the film. The bid and details can be viewed here.

The IEG Sponsorship Reports estimates the NHL stands to lose $230 million in sponsorship dollars due to the season being officially called off last week.

"Assuming the league resumes play at some point, whether (the NHL) will again appear on those lists depends on whether the fans come back to the game," said IEG VP Jim Andrews. If they don't, then the league will have to win the fans back before it can even think of winning sponsors back." Things are not looking good for the sport or its sponsors these days. 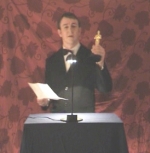 UK Designer Stuart Wilson, who's done some great work and is currently lending his expertise to TBWA in London has created his own acceptance speech.

While it's likely the sort of thinking that goes through a designer's mind when accepting an award for work that's been dumbed down by committee, it's also a great example of what you won't hear during acceptance speeches at this year's Oscar ceremony.

Perhaps because no one is actually going to watch Kirstie Alley's Fat Actress, Showtime has signed a deal with Yahoo to have the entire first episode of the series webcast on Yahoo. The episode will be made available in it's entirety, including commercials, March 7 through March 12. Maybe the air valve in our head is loose this morning, but we wonder why people would go out of their way to watch the episode online with commercials when they could view it offline on commercial-free Showtime. Check that valve for us, would you? Chiding aside, we think it's a great idea to take TV programming to the web. With audience segmentation growing, TV viewing down, multitasking up and personal video player usage growing, it makes perfect sense to "broadcast" programming from the web where it can be viewed at a time of people's choosing just as the TiVo and On Demand services provide offline. Additionally, actual viewership can be tracked more effectively online than off and advertisers will love that.

Yahoo Media and Entertainment honcho Lloyd Braun tells Ad Age he has plans for a "big signature event" that he likens to the sea changing qualities of I love Lucy and The Sopranos. We hope it's not all talk.