Adrants reader Sue Graham sent us this Wal-Mart love poem. Perhaps Walmart should consider hiring her as a copywriter.

Have a baby? Need a crib? THEY have blue to match the bib.

Change the oil in the Car. Dont forget the roofing tar.

Take the battery for exchange, buy that handy outdoor range.

Give the gift that lasts forever! Diamond rings, aren't they clever? Milk, Bread and for a treat, sample turkey deli meat.

Get your pills and your meds, dont forget the full sized bed.

They have SOMETHING that you need, grab some handy garden seed. Fill the tank with walmart gas. Dont forget the frozen bass.

Check your eyes, buy a cake, do you need a garden rake? Charge it on your Walmart card, it's slighty used.. not badly mared.

Adrants reader John Brock points us to a CBS MarketWatch story in which rumors abound and are, of course, denied that Apple may be mulling a takeover of TiVo. Adding TiVo's capabilities to Apple's digital offerings would certainly advance Apple's capability in the digital delivery space. The company has done it to great success with iTunes. TiVo could be a great delivery device for Apple's iMovie. A move like this would not be all that surprising given Apple's success with the iPod and iTunes. Perhaps another success story similar to iPod/iTunes will make the fact that Apple computers are, unfortunately, never going to achieve wide adoption irrelevant. 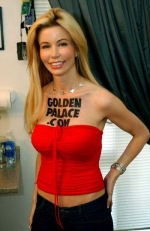 GoldenPalace.com, the online casino which simply can not keep its hands off other people's body parts, has found it way onto the chest/cleavage of LA actress and model Shaune Bagwell. She will wear "GoldenPalace.com" on her body for 30 days. Why is it that hot models always have names with double meaning?

Microsoft has launched an online viral campaign called MSN Found to aid in promoting its new search engine, MSN Search. The viral collects together six characters with their own weblogs which link together and out to MSN Search via odd search terms...which then link back to the viral.

Referring to a study his company, Which, completed finding 77 percent of people say cereal packaging that uses cartoon characters like Shrek and Scooby Doo, Nick Stace said, "Too many characters loved by children are being used to promote foods high in fat, sugar and salt, leaving parents feeling powerless to say no."

While the proliferation of cereal promotions might drive anyone mad, as far as we know, the boxes do not contain a device which prevents parent's mouths from forming the word "no."

The text link ads that appeared in the body of a New York Post article yesterday appeared in error. According to New York Post Spokesman Howard J. Rubenstein, as quoted in The New York Times today, the ads were not supposed to appear publicly. "That was a test of new technology that was not intended to be live. They have not debated or discussed it internally. They are not making any prediction whether they are going to use it."

Oops. Amusing that the mistake appeared in major, yet late, story on the launch of a $40 million, three year ad campaign by the Magazine Publishers of America - sure to be read by everyone in the advertising industry. The Post does not now how the ads appeared publicly and they were removed by 6PM yesterday.

Aligning itself nicely with the explosion of eBay-sold body ad placement is Body Billboardz, a network bringing together those who are willing to sell space on their body with advertisers interested in buying that space. Body billboards, or human ad space, has become a, some say, unique way for advertisers to promote their product or service. BodyBillboardz.com is a brand new classified ad-style website. The website launched on February 2 and is especially popular with money hungry, carefree college students trying to pay off debts and earn a little extra cash.

And look stupid in the process. Profiles are created by those willing to be "branded" and matched the corporate sponsors, who can review each participant's demographic and psychographic profile and align it with their advertising plans. Members are from the United States, Canada, and Germany in the age range of 19-35 years and are allowed to upload photos so the advertisers can view the potential image of their 'walking billboard'. OK, GoldenPalace, here's your goldmine.

Reported earlier, Pepsi has officially introduced it new, global ad campaign featuring Beyonce, Jennifer Lopez and David Beckham at a marketing event in Madrid. The campaign, which includes a spot in which Beyonce and Beckham do battle Kill Bill-style, will focus on music and soccer themes. The campaign will not air in North America.

Screenshots of a Lopez version of the commercial are here. The ad can be seen here. She is seen in the ad with Amr Diab, a popular Arabic musician. Reportedly, the Beckham and Beyonce commercial will mirror this one closely.