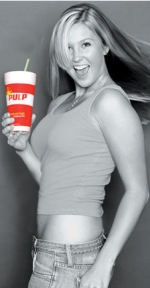 Started by a young Australian girl, Chloe Duffell, who was born in Australia but grew up in America, PULP Juice Bars, a health drink operation now owned by Signature Brand Limited has teamed with Virgin, who has taken a 20 percent stake in SBL's Pulp Health, to conquer the international health drink market. Virgin and SBL then created a new company, of which Virgin owns 80 percent, and are expanding the juice bar franchise across the Middle East, New Zealand, Australia, the UK, South Africa and America. Springwise calls it the next coming of Starbucks. Wouldn't we all rather grab a cup of something healthy in the morning rather than a calorically high Frappaccino? Of course not, but some people will.

There's a website called BizNetTravel that is written by several people including yours truly. Many of you know spelling on this website is far from perfect and some of you take some kind of sick pleasure in correcting many of the errors on this site. While there's no fault in that, you might want to visit BizNetTravel which is offering prizes to those who find spelling errors. Since I write for BizNetTravel, your bound to win. Check it out here.

For the Republican National Convention, Penn Plaza has been transformed into w mini Times Square. Huge billboards for FOX, Captain Morgan, Nissan, Infiniti and Foot Locker have taken over the Penn Center Subdistrict.

Commenting that viewers should, perhaps, be awarded medals for sitting through 14,000 commercials over 1,210 hours of Olympic programming, Stuart Elliot of the New York Times reviews some of the advertising highlights throughout the two week broadcast.

Among is favorites were BMW's farmer ad and many Chevrolet ads including the banned Corvette ad.

MarketingVOX reports NBC is using the Friendster network to promote Donald Trump's The Apprentice by creating profiles for each of the 18 contestants.

While we know there are no new ideas in advertising, reality producers have, apparently, not admitted that to themselves about the reality TV genre. Like some teen movie claiming orange the new pink, TNT will try to convince us their new reality show, He's A Lady is really a new take on reality TV. The show, what Queer Eye For The Straight Guy should have been, takes 11 big burly dudes, fools them into thinking they are competing for in a muscle-fest called All American Male and awards $250,000 to the man who can make himself look most like a woman. Judging this atrocity will be Morgan Fairchild and Detrot Piston John Salley among others.

The finale will imitate a beauty pageant that includes the all important question, "What, as a lady, have you learned about being a man?" Thanks to Adrants reader Charley Brough for the tip.