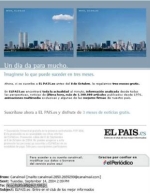 In perhaps the most callous disregard for significance of that day and for the pain it caused the world, Spanish newspaper publisher PRISA has sent out an email ad showing the New York City skyline before and after the fateful attacks of September 11, 2001. The headline reads, "You can do a lot in one single day; just imagine what can happen in three months." (See comments for clarification on this translation) And PRISA is doing this all to promote the online version of its newspaper, El Pais.

Is Spain culturally clueless or is there some convoluted explanation for this insensitive use of imagery? PRISA the same newspaper group that ran the headline, "The world, awaiting expectantly for Bush's reaction," on September 12, 2001.

Jossip has the story on the latest entertainment magazine launch. It's from Vogel Communications, published monthly and is called glued. The magazine is written for the 30-45 year old crowd and will seek to expand on what TV Guide and Entertainment Weekly already offer by focusing on feature articles and leaving the listings behind since most viewers use on screen listings now. The debut issue has Matt LeBlanc on the cover. Jossip interviews glued Editor Candace Korchinsky.

Speaking at the Internationals Advertising Association's 39th World Congress in Beijing,WAN VP Gavin O'Reilly said, "The Newspaper is the new mass-market medium." Claiming newspapers provide a steady environment in the face of fragmented and declining television viewership, O'Reilly said, "Remember that an advertiser's agenda is very, very simple - they want rock-steady reach, reliable demographics and do not want to pay a premium for a dwindling, haphazard audience."

He went on to say that newspapers can consistently reach the elusive customer and discounted claims that the young have eschewed the medium for the Internet and other mediums. "Even if we exclude India and China as obvious growth markets, the trend for newspapers in Europe, Canada, the United States and Australasia is significantly better than most media experts would have you believe."

O'Reilly continued, "Gone are the days when editors say: 'publish and be damned'. Today's editors are acutely commercial, inventive, creative and ever-responsive to new products development and change." That would be why there have bee so many failed attempts at launching "youth-targeted" newspapers, right? Of course, being the CEO of the $2 billion, family-owned Independent News & Media, publisher of 165 newspapers, explains O'Reilly's enthusiasm for the medium.