Janet Jackson's Nipple Not A Big Deal With Parents

It seems most parents are OK with their kids seeing nipples. In a study conducted by the Kaiser Family Foundation called Parents, Media and Public Policy, only 17 percent of parents surveyed were "very concerned" about the baring of Janet Jackson's nipple at this year's Super Bowl. In fact, 53 percent were "not at all concerned." While nipples may be OK, 63 percent of parents were "very concerned" that their children see too much inappropriate content in entertainment and media. Until the media realize they don't have to shoot for the lowest common denominator just to get a rating point and that consumers might actually enjoy quality programming, there is sure to be a continuous supply of slutted up TV. 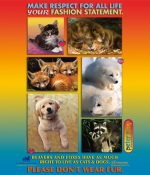 A Binghampton Binghamton, New York CVS has been distributing a cash register coupon which offers $4 off "on any stomach purchase of $15 or more."

Apparently in a hurry to boost sales of stomach remedies, someone was too quick at the keyboard on this one.


Votergasm Encourages Voting And Having Orgasms

B.L. Ochman points to Votergasm, a group that encourages young Americans to vote, has launched a website where citizens can pledge to have sex with or withhold sex from their partners based on there voting plans. Vote and you get sex. Don't and you don't. The group seeks to get 100,000 first time voters to the polls and to "catalyze 250,000 orgasms by the morning of November 3."

If we do our math correctly, there's a few multiple orgasms in there.

Or at least multiple partner action going on. All good.

According the website, "Votergasm is a non-partisan nonprofit campaign formed to simultaneously reverse two disturbing trends in American society: low voting rates among young people, and unacceptably low rates of youth sexual activity. The focus of Votergasm.org is to encourage young people everywhere to pledge to have sex with voters on Election Night, and withhold sex from non-voters until the next presidential election."

We have absolutely no problem with that approach. More orgasms are great for reducing stress and political correctness desease. Be sure to check out the collection of hilarious pictorials ("Letters to members of Congress, Dawn reflects, are like skirts: they get the most attention if they're short, tight, and clear" and "Rod and Mercedes love to have sex on the beach--but, because of the tides, the beach keeps moving! High tide, low tide, high tide... it drives them crazy. They want change. They've written to Congress, but have had no luck. To stop the tides, it seems, they'll have to form an advocacy group.") mixing sex with tongue in cheek political interests. Brilliant.

As marketers continue to seek access to the ever cooler, increasingly elusive consumer, many are turning to cultural insiders like Steve Stoute, a former record exec who now enables marketers to enter consumer realms previously off limits. Stoute puts on events and links marketers to subculture most marketers never knew existed. He's currently helping Hewlett Packard and arranged a post MTV Music Awards party hosted by Sean Combs that involved plenty of liquor and plenty of HP products laying around for party-goers to check out. He's also helped Reebok as well as hooking McDonald's up with Justin Timberlake to create the "I'm lovin' it" theme. Basically, he helps covert marketer's perception of their cool factor into actual cool factor.