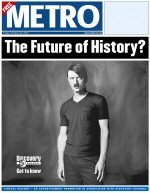 To promote its new Virtual History: The Secret Plot to Kill Hitler airing November 25, Discovery Channel has placed a wrap with the image of Hitler on the London newspaper Metro.