Stern and Powell Have On-Air BitchFight 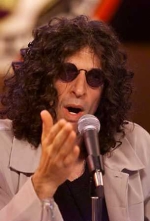 On Tuesday morning, Howard Stern called in to San Francisco's KGO AM 810 while FCC Chairman Michael Powell was being interviewed and engaged in a bit of verbal warfare.

Stern told Powell he is ruining free speech and that the only reason he has the job is because of his famous father, Secretary of State Colin Powell. Powell disagreed stating he was appointed during the Clinton administration when his father did not hold his current position. The two continued their exchange for ten minutes.

Verizon Wireless has teamed with WeatherBug to deliver local weather forcasts to Verizon Wireless Mobile Web 2.0 customers. Verizon Wireless customers can now access live weather information and alerts from WeatherBug's network of 7,000 local neighborhood WeatherBug Tracking Stations. In addition, customers can choose the WeatherBug Tracking Station closest to them at any time - whether they stay close to home, travel or want to view weather from a station across the U.S. - to receive live local weather and alerts. Customers can also view WeatherBug's extensive collection of community photos, and subscribers with camera phones can capture photos of weather as it is happening and submit the images directly to the WeatherBug Photo Community.


Meyer Golden Parachute Could Serve Many