Joining the now lengthy list of "adver" media, Advercan has introduced can top advertising offering the potential to deliver 260 billion impressions per year. Five years in development, the six-layer plastic Avercan label serves as both an advertising medium and a "Cleancap(TM)" designed to keep the can top clean from the bottling plant to the store shelf. The company says the protective seal can thwart the spread of dirt, germs and other contaminants. It also fills up landfills quickly too but Advercan isn't promoting that small detail.

"Advertisers are always looking for ways to reach consumers with unique new messaging," said Advercan founder Kenny Mac McClintock. "This label double-delivers: It promotes the advertiser, and creates cleaner can."

McClintock adds the can top provides means to bottlers to reduce costs.

The account is currently with Omnicom's PHD and it is said four shops will be vying for the business. Presentations are expected in December.

Lying through his teeth, Porsche rep Martin Peters said, "We have no issue with PHD, this is simply a matter of good business practice.

Management rules require that we review from time to time."


Ad Agency Gets Humble For Client

David Burn of AdPulp calls attention to an outdoor campaign by tda advertising and design for their client Wahoo's Fish Tacos in which the agency cops to the truth while allowing their client to rise above. 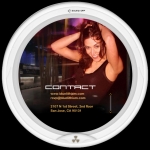 As the New York AD:TECH show approaches, inboxes are beginning to fill with party invites as companies vie for conference attendee's attention. Online ad network, Bluelithium, reprising its San Fancisco party of last May, has sent out a fancy Flash invite for an event that will be held at New York's Show Nightlife from 10 PM to 4 AM, Tuesday, November 9. Also hitting inboxes is an invite for the Tribal Fusion party to be held Monday night, November 8 from 9 PM to 1 AM. Tribal Fusion promises an open bar all night. Bluelithium promises an hour of open bar from 10 PM to 11PM. Plan accordingly.

Tribal Fusion will also host the Grand Opening Reception in the Exhibit Hall on Monday from 5 PM to 6:30 PM. Following that, Overture will host The Overture Mixer from 6:45 PM to 8 PM. Without a moment to rest, the New York Interactive Advertising Club, 212, invites you to their event beginning at 8PM - location TBD. A full list of official AD:TECH social events is here.

It's very likely other parties will pop up at the last minute making party coverage a frantic undertaking but we are here to help you party virtually if you choose not to do so physically.

"Media buyers are realizing that they can take a huge chunk of their budget for one page, one month, and get a diluted audience--or they can get into six other books that deliver that guy they are trying to reach," said Razor Publisher and Editor in Chief Richard Botto.

Razor has seen growth rates of 130 percent bringing on new advertisers such as Ford and BMW while larger laddie books like Maxim which saw a 16 percent drop in newsstand sales through June and an 11 percent drop in ad pages through September.

Botto says there's a big misconception about the current generation of men and that is, while they still enjoy pictures of hot models, they enjoy reading just as much. Razor provides for that with intelligent editorial and investigative pieces such as its recent story on the White House transition from Clinton to Bush.