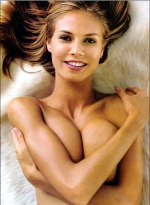 Perhaps following the lead of its Japanese counterparts, McDonald's has signed a deal with supermodel Heidi Klum to be its new McHottie. Attempting to distance itself from the negative press generated from the film Supersize Me, McDonald's has decided to prove, once and for all, it can fool America into believing its food will make all Americans as hot as Klum.

Unfortunately, Klum knows otherwise and has already put a negative spin on junk food saying, "I like to be healthy and eat well, but I also like to have a good time and have an occasional glass of wine or French fries." We're sure McDonald's will shut her up immediately, filling her mouth with appropriate pro-junk food speak.

Klum is currently spokesmodel for Birkenstock shoes and for Target, who apparently, is now selling Marijuana and Crack.