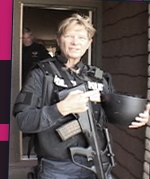 To promote its show Women and The Badge, a "compelling series explores the lives of real women on the front lines of law enforcement," Oxygen Network has launched a weblog called Officer Dubina's Blog.

It's an inside look at the life of Jan Dubina, a Phoenix Police Department Special Assignments Unit member, who's also featured on the show.

Dubina minces no words when it comes to her job and the lives of those she comes into contact with writing, "My job is often as a negotiator, but its not always like it seems to be in the movies. Actually, much of my time is spent negotiating with possible suicides in an effort to keep them alive. I cant say how successful I am because if a person decides to kill themselves is that a failure? I dont look at it that way. There are people who are determined to kill themselves no matter what, and some want us to kill them." OK, then. 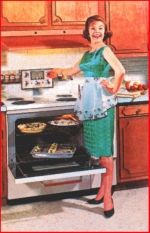 Sort of like Hollywood where it's all about remakes, retellings and outright usurping of previous ideas, some companies have found that dusting off old brands rather than inventing new ones is the clearer path to profit. For example, the meat-in-a-can turned email marketing blight Spam brand is making a comeback in Britain and will be the focus of a new broadway musical called Spamalot based on the 1975 movie Monty Python and the Holy Grail. Or take Old Spice. Who knew your Dad's favorite deodorant would now be the choice of today's cool kids. An interesting new campaign and a gaming sponsorship with EA's NCAA 2004 have made the brand the number selling deodorant with a 20 percent market share.

Back in the day when stay-at-home-moms where quaintly referred to as housewives, there was a popular cleaning product called Comet. P & G gave up on the brand in 2001 selling it to Prestige Brands who, rather than letting it die, returned it to the number one selling household cleaning powder with an aggressive low-cost retailer distribution strategy. Perhaps now, with the return of Comet to top spot and the success of ABC's Desperate Housewives, the political correctness of the whole stay-at-home-mom thing can be ditched, playdates can go back to being called "having a friend over" and househusbands can hold their head high.

Snapple, which seems to have all but disappeared from convenience store shelves is making yet another comeback.

The beverage company is bringing back Wendy Kaufman who appeared in early 90's ad campaign and then again in 1997 for a short time.

Debuting on January 17, Cliff Freeman & Partners has created a new television campaign featuring Kaufman interviewing fans about the brand and then interviews others about those fans. Similar to the original campaign, Cliff Freeman & Partners Chairman and CCO said, "The concept of returning a favor is a welcome message today. People find the tone appealing." The campaign will also include an under the cap promotion offering a chance to win a VW Beetle convertible.