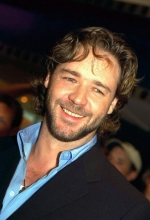 Always one to cause a stir, actor Russell Crowe, in a GQ interview said actors who go overseas to do commercials are a bunch of money hungry losers.

Crowe told GQ, "I don't use my celebrity to make a living. I don't do ads for suits in Spain like George Clooney or cigarettes in Japan like Harrison Ford. And on one level, people go: 'Well, more fault to you, mate, because there's free money to be handed out.'" Take that you Hollywood sell outs.

He further snipped, "...to me it's kind of sacrilegious. It's a complete contradiction of the fucking social contract you have with your audience. I mean, Robert de Niro's advertising American Express.

Gee whiz, it's not the first time he's disappointed me. It's been happening for a while now." In today's over popified culture, he does have a point.

If you want to see more of what Crowe speaks, visit Japander.

There, you will see an enormous collection of Hollywood stars who do commercials in Japan to make more money thinking visibility there won't over expose them here. Perhaps they haven't heard of the Internet.