Following the car giveaway on Oprah, Pontiac is extending its reach into the realm of product placement with embedded appearances in the WE Women's Entertainment Cinematherapy show, a movie showing with bookended commentary. The car will appear at the beginning and end of the show when the hosts introduce and then review the movie. During those periods, the car will be driven while the hosts discuss the movie as well as show off the car's features.

Well that was quick. And mercifully so. It seems Wendy's and McCann came to their senses and have cancelled this poor excuse for an ad campaign after less than a year. Granted, following up Dave Thomas is a challenge but the Mr Wendy campaign definitely fell into the "what were they thinking?" category.

The campaign will cease at the end of the month and McCann is expected to launch new creative in December. Let's keep our fingers crossed.

Mildly related: A Wendy's training video made in the 80's.

Shocking audiences by appearing fully clothed, Kylie Minogue introduced a new line of lingerie Wednesday in London. Appearing not so fully clothed were a collection of the usual runway hotties strutting the new Foxy Fishnets, Peek-a-Boo suspenders and underwear styles. As Kylie stood up to introduce the line, photographers can be heard in the back ground yelling, "Kylie, turn around." "Kylie, bend down." Alas, all they wanted was ass.

Fleshbot points to the hotties doing there thing here and in a video here. 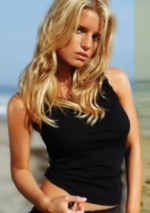 Timed to deflect attention away from sister Ashlee's unfortunate Saturday Night Live mishap, Jessica Simpson has entered into a $10 million licensing agreement with New York's Andrew Sports Club to introduce a line of junior sportswear (Jessica Juicy?), kid's clothes, dresses, hats, watches, jewelry and, of course, underwear. The line will hit stores in time for next year's back-to-school Simpson recently debuted a line of edible body fragrance and a line of branded home furnishings has been mentioned as well. Simpson will introduce the clothing line on her MTV show, The Newlyweds.

Paying tribute to the seventies cartoon "Fat Albert and the Cosby Kids," Minneapolis-based Olson + Co. has created a new ad campaign for the Detroit Pistons. The ad campaign, called "Interplanetary Pistons," consists of two minute spots (which can be viewed from the Piston's website) that mirror the look and feel of the "Cosby" cartoon and aim to portray millionaire basketball players as appealing to regular homies in the hood.

Adrant queried an intern who worked at the agency during the creation of the campaign who said, "I interned at O+CO when this was just an arbitrary idea. I was sent all over the city to hunt down old tapes of Fat Albert episodes. No one thought the it would see the light of day, and now its making a buzz" The agency came to the realization that cartoons aren't just for kids.

Grownups like them too. "The mistaken stereotype is to say that animation is a child's treatment. That's really not true," said former Campbell Mithun CEO Howard Liszt.

The first spot debuted this week at the team's season opener and will also be shown on local Detroit TV and on the web. The videos compile a selection of NBA stars, such as Shaquille O'Neal and Yao Ming, as "guest villains" who go up against a group of "superhero" Pistons.

Olson + Co. has created nine of the videos so far.

Lorne Michaels, who we weren't sure was still alive, has decided to use the reality television genre to seek out his next SNL comic. He will reportedly play the now overdone Donald Trump-like overlord firing bad comics until there's just one comic left standing. Sound familiar? It should.


YellowPages.com Acquired By SBC and BellSouth

SBC and Bell South have created a joint venture that will marry YellowPages.com, BellSouth's SmartPages.com and SBC's RealPages.com into one very large national telephone directory which will debut early next year. MarketingVOX reports the deal is worth close to $100 million. The new corporate office will be created in Pasadena, CA for the operation.


Teens Girls Not As Fickle As Once Thought

Ypulse points to a recent study by Harris Interactive examining teenage girl's brand loyalty. The study found the teens have become so saturated with marketing they have turned into savvy, budget-conscious shoppers who will stick with a brand once they've found one they like.

Business-focused travel agency BizNetTravel has relaunched its travel log, a frequently updated compendium of travel topics including travel news, featured destination overviews, travel guides and advice from seasoned travelers. It is now written by Olivier Travers, a business consultant with a bent for traveling.