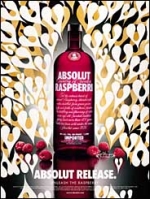 For years, Absolut vodka, with its bottle-morphing creative, has been seen on the pages of most every magazine published. Now, the vodka giant is taking its campaign to television with four new spots that will launch next week on national cable channels such as FX, VH1, E, Spike TV, USA and BET. Even as Absolut's print efforts have been very successful growing the brand to the number one selling imported vodka, Absolut President and CEO Carl Horton offers no good reason to bring the campaign to life other than to say, "We look at it as bringing the print ads to life. Our campaign has continued to evolve over the years. TV is another part of the mix."

Each of the ads will chronicle four artist's creative rendering of the Absolut Rasberri bottle in time lapsed fashion which are then displayed as, surprise, print and outdoor ads.