Publishers Work to Increase User Base

Zimbalist opened the session with an overview of market conditions and then questioned the publishers on the current market is treating them.

Marketwatch's Kramer says his users have become more and more engaged in the site and that implementing behavioral targeting has provided an increase in value of each page of 3-4 times. Page design has been modified to lure users deeper into the site.

Washingtonpost.com's Little explained 80 percent of site users are not local necessitating page redesign to insure visitors know they are on the site. Additionally, she is considering the launch of two separate homepages catering to the specific expectations of local users versus national users. Times Digital Nisenholtz says the site sees 13-14 million users per month each spending between 38 and 40 minutes on the site. He considers this “not acceptable” and is building out the back of the site with more content as well as adopting rss feeds and syndication as methods of bringing additional users.

Moderator Zimbalist then asked the panel to comment on the increasingly distributed nature of the web and the emergence of RSS. Little says coming in through the home page is an old model and coming in sideways is the new method or arrival for most users. As well, the site has begun to write headlines differently online than off to more effectively attract search engine traffic. WeatherChannel's Wilson her site has been an early adopter of wireless delivery and aims to "surround the consumer with weather info: no matter where they are."

All publishers agreed that paid subscription models are not a priority nor are they a viable revenue stream at this point. Most publisher also agreed that combining sales efforts with offline properties has been a challenge as well due to the differing language of the two media and, at times, opposing sales goals.

When asked by a by an audience member how weblogs are affecting their sites, Nesenholtz say the New York Times has embraced weblogs and now links to them from some online articles. He says he "sees nothing wrong with pointing to another sources of content.” This, along with the implementation of RSS feeds, Nisenholtz sees as more of a user service rather than a revenue channel for the site. 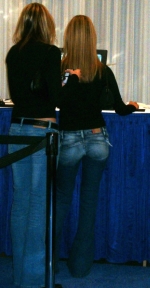 It was a very busy afternoon and evening socially at AD:TECH Monday with at least six parties vying for attendees attention. Kicking off the party scene was old standby TribalFusion which hosted its end-of-day exhibit hall party with beer, wine and finger food. Since the party was held in the exhibit hall, TribalFusion's party is always an interesting mix of business and anticipation of what's to come later at night. Partaking in the party spirit, DoubleClick's Rick Bruner mugged for a shot with Did It.com's frogs.

Once the exhibit hall cleared out, attendees headed down to the hotel bar where Overture held its Mixer providing attendees, perhaps for the first time today, a place to sit down. relax and spend some time with business associates in a more informal environment. A full compliment of buffet items were available to cater to all food preferences - as long as those preferences were limited to fried food. The day's hunger won out over any concern for cholesterol levels.

Next up was the Viral and Buzz Marketing Association's get together held at Whiskeys. The venue was, for once, conducive to conversation even if the lighting was such that significant squinting was required to see who you were talking to. Open bar had a way of making this irrelevant. The center of the party was DMC Founder Justin Kirby who was decked out, head to toe, in a shimmering white suit. Just before leaving, a conversation with Pod Digital Design Principal Liz Curran and her co-principal husband ensued leading to the discovery the Curran's living a stone's throw from our little Massachusetts town. 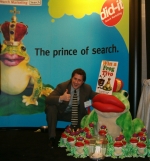 Then it was over to 327 West 44th to Babalu for the 212 Networking event, along with BlogAds Henry Copeland, which turned out to be the first throb-fest of the evening. Joining the entourage were iCrossing's David Berkowitz and eMarketer's Waisum Tam. For some unexplained reason, the DJ had an odd fascination with eighties Michael Jackson music that grew in volume to the point where head bobs, ear screaming and hand signals became the only means of conversing. That said, the evening connected many long time industry vets including Underscore Marketing President Tom Hespos and a very pretty woman in a long pink coat with a beautiful smile who's name we were, sadly, unable to obtain.

Shifting gears to the late night events, it was TribalFusion's turn again to play party host. This time, the ad network hosted a party at the P.M. club. When entering, it was surprisingly quiet compared to the earlier 212 Networking party but within an hour, rising from the plush, booth-style couches became a fruitless endeavor. Thankfully, the company a JWT'er who engaged Tam in a boisterous conversation about weblogs and one woman from “can't remember the name of the agency” who engaged in the intriguingly repetitious behavior of checking messages on her cell phone, smiling beautifully and pulling her short black skirt down made leaving the couch unnecessary.

Once we did tear ourselves away from the enjoyable company seated at our comfy couch, the final throb-fest of the night was up next at Crobar. We're not sure who hosted this party but there were a lot of banners hanging inside the venue with the words “traffic” on them. The Crobar party continued the baffling need for sponsor companies to create VIP areas that end up more crowded than the non-VIP areas.

Thankfully, the delightful Tia Fix, now with MagicJupiter, was there with her pre-historic Barbie Polaroid camera to snap pictures framed by frilly, Barbie-like borders. While it was amusing to experience the gut-pounding dance music - again, an odd fascination with eighties Michael Jackson - , the writhing bodies on the dance floor and the ubiquitous booty shaker in the VIP booth next door, the cell phone clock was delivering a very clear message. It was time to go home. We did and we're glad as we write this on a semi clear-headed Tuesday morning as opposed to a hangover induced Tuesday afternoon.