In an intriguing combination of viral promotion and telemarketing, Target is insuring attendance to its two day sale November 26 - 27 by letting shoppers, on November 17, sign up to receive a wake up call on the day of the sale. Visitors to this site can view videos and choose their caller from a list including such odd characters as Darth Vader, some cheesy heartbreaker, a tween diva, a helpful construction worker, Dennis the rooster or Heidi Klum. The work was created by Mother New York.

Among members of the American Advertising Federation, 76 percent feel DVR technology will lead to change in television advertising. Many (55 percent) stated non-traditional forms of advertising like product placement will grow but that the :30 will remain the mainstay of the medium. While 76 percent state the medium will see change, just 20 percent think the effect will be "dramatic" such as the death of the :30 MarketingVOX points out most members of the AAF are senior level marketing staff at brand companies who possess a certain level of "cluelessness" about new trends clinging, instead, to old models. This is, perhaps, why, as MarketingVOX claims, television buying rituals have not been affected much yet by this new technology. 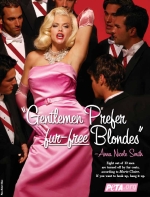 In reaction to a survey published in the September issue of Marie Claire with found eight out of ten men are turned off by women who wear fur coats, activist group People For The Ethical Treatment of Animals has created a new ad featuring Anna Nicole Smith. In the ad, Smith, in a pink satin dress, poses with a group of tuxedoed Suitors alongside the headline, "Gentlemen Prefer Fur-Free Blondes" and copy telling women, "If you want to hook up, hang it up."

Smith Joins a long line of celebrities, including Charlize Theron who posed with her dog in a recent ad, who are adamantly anti-fur. The campaign supports the organization's website, FirIsDead.