MediaLife takes a look at the continued success of ABC's '8 Simple Rules' and how Katey Sagal and, importantly, the addition of James Garner have played key roles in maintaining the show's popularity. Many thought Sagel could not carry the show and in many ways, partly due to her "Married With Children" success, she has. Garner, whose popularity spans three generations provides and important anchor to the show. While the show is not regularly in the top 20, it continues to do well in its Friday time slot.

If you can't get enough Donald Trump on Thursday nights, now you can have him with you every minute. Stevenson Entertainment has introduced the Donald Trump Talking Doll.

The 12" Donald J. Trump doll features 17 phrases that include advice from Mr. Trump as well as his trademark boardroom dismissals. Among the 17 sayings are, "I should fire myself just for having you around", "This one's easy for me...you're fired", "That was a tough one", "Think big and live large", and "I have no choice but to tell you, you're fired".

It's a great gift for that pompous ass down the hall from you who needs his puffed up image of himself put down. Who better than the man himself to do it. So go ahead. Buy one. Put it in your bosses office.

Better yet, bring it to a meeting, hide it under the conference room table, and let The Donald rip when the meeting becomes dominated by that PowerPoint loving, white board dominating, ass kissing, self important windbag. Sort of like Maria who got the boot last night.

Catering to the likes of screaming girls at a Jojo concert, Nokia has launched a design-a-phone site to promote its new Nokia 3220. On the site, a custom phone back can be created. Called Nokia Express It!, five finalists with the best designs will be selected by the editors of Seventeen and CosmoGIRL based on the impossible to define metrics "originality and creativity." Visitors to the two publication's websites will then vote for the winner who will receive a new Nokia 3220 along with accessories. Everyone scream now. 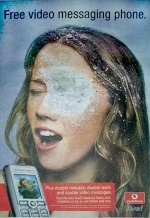 While we're sure Vodaphone intended this image to convey the shock a woman might feel after having a snowball land on her face, others feel it's an expression of joy following receipt of a certain climactically delivered thrust of Christmas excitement. And who are we to disagree with such a brilliant assessment? In fact, advertising imagery should always be this attention getting.

The ad appeared in several UK papers Tuesday and The Register offered it's suggestion for a better tagline, "Free video messaging phone: because Santa comes just once a year." Nod to Rick for this.