Calvin Klein Brings Back CK One With New Ad Campaign 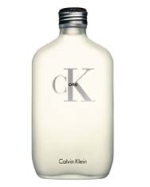 Ten tears after its grunge-like CK One campaign, Calvin Klein is relaunching the brand in April with a new television, outdoor and print ad campaign. The campaign will feature 40 mostly unknown models in a hip party scene in a building shaped like the CK One bottle. The campaign, designed by Fabien Baron and shot by David Sims, will continue with the "You're the One" tagline. 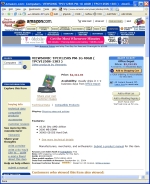 Either a joke or a simple error, Amazon has listed a Viewsonic monitor as a computer having a 10GB chip, 2,000 DIMM, a 30,000 GB hard drive and weighing 14 hundredths-pounds. All for $2,312.95. Certainly, there will be computers that powerful someday soon but not right now. One reviewer raved about the "product," writing, "This laptop is the bargain of the decade. 10.00GHZ of power.

I use one to currently calculate the meaning of life, the universe and everything. I even caught it calculating on how to make the perfect cup of tea. The speed that this laptop can move at is nothing short of outstanding. Shame it doesn't have legs though."

Sure to be removed from the site at some point, here's a screenshot for posterity's sake.

"We've never had any incident that suggests that heroin or meth is being sold or distributed in our hallways," said Principal David Claypool. "It's just an unfair accusation." The kids thinks Vecchio is stretching it a bit too. Senior John Mallory said,"It was irresponsible. About 99 percent of the school doesn't do heroin or crystal meth; it's a tiny pocket, and the deans and administration are doing a good job trying to combat it."

Vecchio said he met with children in the town who told him drugs were on sale at school and, perhaps in reaction to a friend's 15 year old son dying of a heroin overdose last fall, Vecchio decided to spend $900 of his own money to place the ad and raise awareness of the issue. 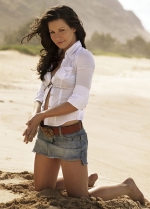 Not new, as AdJab points out but since we go weak in the knees for Lost's Evangeline Lilly, we just thought we'd dream a little dream for a minute or two as we write and tell you she's the face of telephone chat service LiveLinks.

Great score for LiveLinks. We do wonder though if, with her new found fame, she regrets associating herself with a service for shut ins with no social life. OK, that's harsh. Everyone lives a different lifestyle but still. Alright, we're done with our Evangeline Lilly moment.

Acknowledging the forgone conclusion that, just like sexual abstinence, there's not much a parent or minister can do to stop kids from playing Halo 2, several churches are embracing the games as a channel through which to teach gospel. Director of Equipping of Dare 2 Share Ministries International Lane Palmer explains, "The point is that almost everyone already has run out and played it, so we think this is an awesome opportunity to take something hugely popular in our culture and turn it into a way to share the most important message. What we need are people who approach their Christianity with the same passion and concentration as they do with video games."

Palmer likens the story line of Halo 2 to that of the Bible, "Don't you just hate it when a bunch of outer space freaks get together and decide it's their mission to torch humanity? ...the Halo storyline is remarkably like a major theme of the Bible."

"God created people in a perfect world in a perfect relationship with Him, which made Satan and his angels very jealous. So since the beginning of time, they have been on a mission to destroy all humans.

Here's what Jesus said - 'A thief (Satan) is only there to steal and kill and destroy. I came so they can have real and eternal life, more and better life than they ever dreamed of' (John 10:10). Jesus came to this planet to save the planet from a group much worse than the Covenant and from a fate much worse than physical death."

Comedians Wanda Sykes and Adal Ramones are featured in a new, national radio campaign for Greyhound Lines, Inc. aimed at urban and Hispanic markets. Already running in the Pacific Northwest area, the campaign is slated to launch in the Southwest in April.