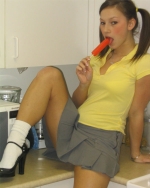 A group called the Society for the Prevention of Misandry (hatred of men) in the Media has launched a campaign against New York advertising agency McGarry Bowen, creator of the Verizon "Homework" ad that shows a bumbling Dad attempting to help his daughter use the computer. We offered some commentary on this campaign earlier. While hatred of men surely isn't the intent of the Verizon spot, the Society's website provides information on how those who feel men get a bum wrap in advertising can contact McGarry Bowen, their clients and the press.

Founded in 2003, the Society was created "in response to the increasing prevalence of negative representations of fathers, husband's and men in mass media." The group hopes to use McGarry Bowen clients as leverage towards their cause and has provided contact info for the agency's clients: Crayola, Marriott, Pfizer, InBev, JPMorgan and Reebok.