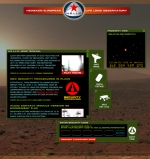 A grass roots campaign that grew out of discussions amongst small retailers facing larger chains such as WalMart yielded an advertising campaign to support local businesses. The campaign, developed by Boulder Colorado based Boulder Book Store owner David Bolduc and others, is funded by an alliance of local businesses who have an interest in co-existing with larger chain stores. The campaign has appeared in Boulder, Raleigh and now Louisville. Beginning late last year, the Loiusville campaign carries the headline, "Keep Louisville Weird."

The ad appears on billboards and on busses.

The campaign hopes to stave off community homogenization. Whether campaigns such as this will win out over consumer's desire for the lowest possible price is unclear. Quite clear, though, is the dehumanization of local culture and the increasing inability to think in un-homogenize ways.

While the idea is over two years old, all those eBay ads selling forehead space, pregnant belly space and cleavage have motivated "hipchewy" to sell his/her dog as ad space. The dog, Peanut, is a Wiener dog and the ad claims Peanut will wear branded clothing anywhere its owner takes her. Starting bid is $1,500. Hello, GoldenPalace?

The Association's mission is "to promote viral advertising to the wider marketing industry. Through working with other individuals and organisations to provide a better understanding of how viral advertising works, and to demonstrate why it should be a part of every modern media plan."

The association hopes to provide support and research to marketers and advertisers interesting in viral advertising. The Association's founder, Asa Bailey, is also founder of the Viral Awards and was behind the Ogilvy & Mather domain name highjacking.

Writing on his weblog (see, everyone has one now), KFOG DJ Big Rick Stuart explains how he peered out his window Saturday morning and got a peek at a photo shoot in progress for the 2006 Range Rover Sport. Check out his observations and see a bigger picture of the shoot here.