ANIMAX has created a series of webisodes and a website for the Starlight Starbright Children's Foundation. The "Coping with Chemo" shorts are aimed at helping teens cope with the physical, emotional and social impact of cancer and chemo treatment. Mixing storytelling and humor to communicate serious messages, the animated shorts reach out to teens using their language. Having survived Cancer, we're a fan of this sort of thing.

Underscore Marketing CEO Tom Hespos writes a thoughtful and detailed article outlining how agencies are creating the very thing they claim to have no part of: malicious and underhanded placement of advertising on consumer's computers. Referred to as Malware, this software causes much of the agonizing "advertising attacks" many users experience while online. Much of the advertising that makes it to Malware is supplied by the blind media buy. This is a buy made by buyers through lead generation companies where an agreed upon number of leads are guaranteed but the sites on which the ads will appear remains secret. The advertiser nor the agency knows where all the ads will appear. This practice allows the lead generation company free reign over the tactics it uses to obtain those leads. Hespos explains most of the ads placed through blind buys end up on sites no reputable advertiser would ever want to appear. By allowing these blind buys to occur, the ad industry itself perpetuates the existence of malicious malware (and other forms of online crap-ware) which so completely debilitate a user's online experience that it threatens to shut down the entire online advertising medium.

Hespos also offers suggestions on how our industry can work towards crapping on the crapware vendors, leaving them high and dry and the online advertising industry in much better shape.


Weblogs Are A Good Media Buy For Advertisers

Higher click throughs and low out of pocket costs are driving some advertisers to weblogs writes B.L. Ochman. "Advertisers including Paramount Pictures, The Wall Street Journal, and The Gap are successfully reaching niche audiences for a fraction of the cost of traditional advertising and a handful of bloggers are earning six-figure incomes from their blogs. Why aren't more advertisers and bloggers getting together? Fear, ignorance and the knowledge that a lot of pioneers got shot."

With their low cost, niche focus and more personal tone, weblogs are well positioned for a media landscape controlled more and more by consumers who have increasing methods of filtering the content they consume. The growth of weblogs has also been fueled by RSS (Really Simple Syndication) which is a method of publishing weblog content out to personal newsreaders and news aggregation services increasing readership.

In an interview with The Hollywood Reporter, Bill Gates said what many have said for some time now - the current broadcast television model is dead. Acknowledging the changes brought on by Tivo, On Demand and Microsoft's own Media Center, Gates says content delivery will change dramatically. "The ideal for many content people would be that they just put their content on the Internet and then they have a direct relationship with the viewer," Gates said.

The Motley Fools are advancing the theory Viacom may aquire a minority stake in Sirius, rather than outright buy the satellite broadcaster as earlier rumors had suggested, following Howard Stern's move to Sirius in 2006. A minority stake and resulting partnertship would make it easy for Viacom to cross promote the show on its cable properties and increase the likelihood that Stern would ultimately work for both Viacom and Siruis.

As reported earlier, an ad industry spoof site called New York Post House coupled with New York Post look-a-like newspapers handed out yesterday and today near New York ad agencies has been revealed to be the work of New York's Night Agency for its client Crew Cuts, a post-production house. The agencies being targeted include Kirshenbaum Bond, Mother, Amalgamated, Margeottes Fertita + Partners and 35 others.

While not exactly an ad, this video and Brooklyn International Film Festival Best Animation winner by 31 year old Simon Robson featuring the voice of Barry McNamara takes the U.S. to task for what the film calls "The Project For The New American Century." Filled with accusations of government insiderism with right wing thinkers, militarists and industrialist, the video names Dick Cheney, Donald Rumsfeld and Richard Pearl as major players in a "neo-conservative manifesto which includes in its toolbox the unbridled use of war in clearing a path for U.S. interests." It also calls September 11 "merely the pretext" and "Bush merely a figurehead" in this supposed clandestine effort to rule the planet. 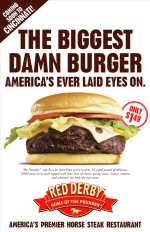 To protest the legality human horse meat consumption in Ohio, local horse rescue group Second Chance Horse Rescue launched an ad campaign promoting a ficticious restaurant chain called Red Derby Burger, to illustrate what life might be like if horse slaughter for human consumption proliferated. With the headline, "The Biggest Damn Burger America's Ever Laid Eyes On," the ad ran several times in local media prior to the truth being revealed both in print and on the spoof website.