Meyer Golden Parachute Could Serve Many


Missy Elliot Gets Caught Bending Over For Virgin

To promote its call and text bundles, Virgin mobile will launch an ad in the UK that features Missy Elliot getting herself into a rather awkward but very innocent position. 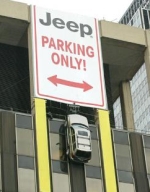